We are a chef-driven restaurant. Our passion for food and fine dining comes first for our guests. We invite you to join us for an unforgettable culinary experience.

Trying his hand in music, environmental science, nursing and videography, Keith Moorehead has pursued many of his interests in his professional career, but always felt most at home and passionate in the hospitality industry.

Moorehead holds an Associate’s degree in environmental science and technology from Columbus State Community College and has held jobs in many fields around the Columbus area.

He previously held positions at various Columbus organizations and began working in the front of house in 2008 at Martini Modern Italian. In 2012, he transferred to Cameron’s American Bistro as the Dining Room Manager before being promoted to General Manager. Keith has now come back to Martini, only this time as General Manager.

Moorehead offers three pieces of advice to those desiring a job in the hospitality industry: be passionate about the work, leave nothing to chance, and always wear a smile to work. His favorite thing about working for Cameron Mitchell Restaurants is the value placed on associates at every level.

Whether Moorehead is making dinner for his family, making music, or building something for his children, he truly enjoys creating and transforming ideas into something unique. He resides in Columbus with his wife Brittany, and their children, Finley and Dylan. 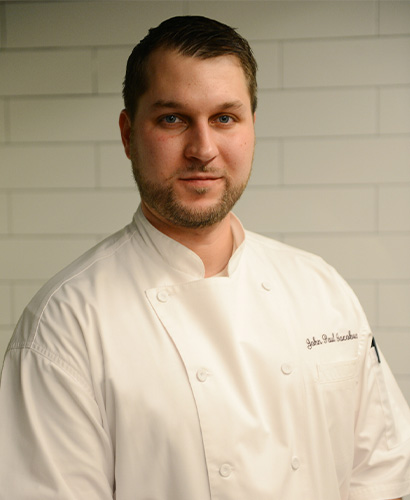 Chef John Paul Iacobucci (JP) was named executive chef of Martini Modern Italian (Martini) in June 2020. Chef Iacobucci’s professional path began as a dishwasher when he was 16. He ultimately fell in love with the fast pace of the restaurant industry and quickly worked his way up.

Iacobucci traces his love of cooking back to his childhood with his large Italian family in Marion, Ohio. He has fond memories of visiting his grandmother, picking fresh herbs and vegetables in her garden and learning to make pasta, meatballs and sauce from scratch. Although Iacobucci loves learning new cooking techniques, his favorite culinary style is still Italian and his favorite dish to serve to family and friends is spaghetti with tomato sauce.

He says that all chefs can benefit from a hunger to learn more and from striving to do better. With over a decade of experience with Cameron Mitchell Restaurants, his mission is to constantly learn more about his ingredients and where they came from.

Iacobucci resides in Reynoldsburg. Outside of work, he enjoys playing golf, listening to rock and roll, and spending time with his children.